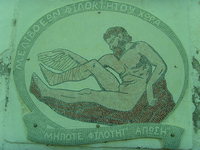 sqlplus indeed does not offer a wealth of options on the command line. When it comes to running sqlplus in a dos shell the prospects even go worse for executing some batch logic outside the sql script itself (I still did not manage to find me some time to learn more abount power shell, maybe things work out smarter there). Say, for example, you want to deploy a package body to a number of instances but have no option to inject the sqlplus commands show errors and exit into the package body file. All you can do that far is setting up a batch script, probably unsing the “-s” and “@” options of sqlplus, containing a three-liner for each and every instance like so:

For a large number of instances, the actually (my point) superfluous two lines of show errors and exit may lead to tedious batch scripts containing almost redundant commands. Knowing how to pipe commands into scripts from un*x, I investigated options to behave comparably on windows and dos shell. Not some 15 minutes later, see the refs below, i came up with the following approach that makes the three-liner a one-liner (like that), takes no change against the package body file whatsoever and even reduces the output by another two lines.